The G5.UNV series is bidirectional regenerative and can operate in CV, CC, CP, CR, and Ri-Sim control modes. It is universally applicable and therefore suitable for all industrial and scientific applications in laboratories and on test benches.

The modular and finely graded G5.UNV series is characterized by highly dynamic response times, adjustable filter time constants, and a wide current-voltage range with an auto-ranging factor 3. The power supplies of the G5.UNV series are equipped with the function and software modules for the simulation of energy storage devices and solar arrays as well as for the testing and evaluation of batteries and fuel cells. The engineer therefore has a power supply available that easily covers a wide range of applications.

The G5.UNV series is the fully equipped all-rounder! It contains all necessary function and software modules for the simulation of energy storage devices and solar arrays as well as for the testing and evaluation of batteries and fuel cells.

Various excellent features such as switchable filter time constants and adjustable controller settings as well as the integrated powerful 8-channel digital scope assist the user to quickly and easily achieve optimal system behaviour for a special customer application. The G5.UNV series also offers the possibility to store, edit, and recall any device configuration on board the power supply.

As a PV simulator the G5.UNV series features especially low capacitance values in the output filter stage, switchable earth leakage resistors, and the versatile application software SASControl. The powerful platform for R+D and testing of PV inverters fully complies with the efficiency measurement procedures for maximum power point tracking (MPPT) in inverters as described in EN 50530. Core of the application software SASControl is a versatile script programming system which allows the easy implementation of individual programming sequences. Report generation of measured data is included.

As a battery simulator the G5.UNV series realistically and dynamically simulates both the electro-chemical and electrical properties of a battery type in charge and discharge mode. Other features include high data resolution and options for meeting high safety standards for operators. The real-time computing process of the application software BatSim perfectly matches the internal timing of the DC power supply. Therefore, an optimum computing rate is achieved leading to very short response times even in cases of steep changes in charge/discharge currents. Each battery type reacts in a specific manner to charge and discharge currents in terms of state of charge, cell voltage, ohmic and parametric losses, and polarization effects. These dependencies are considered by specific mathematical models used in the REGATRON BatSim software/firmware. The operator can fine tune the model with several well-defined parameters to adjust the simulation to a user’s requirement.

Models of the following battery types are available for configuration: Li-ion, lead-acid, NiMH, and NiCd.

As a battery tester the G5.UNV series has an exceptional electrical performance that offers several advantages for battery testing applications:

The application software BatControl allows selecting and running so-called BatScripts. These scripts automate the manually given commands to the G5 Battery Tester and allow the running of these commands according to defined schedules:

For use as fuel cell simulator the G5.UNV series utilizes the integrated AAP function. The AAP application area programming feature allows to set the DC output voltage or current or power as a function of any of the input values IDC, UDC, or PDC. The functional relationship is given by a user-defined curve whose values are managed by CSV import/export. In this way, a wide variety of nonlinear electrical two-pole networks can be defined, e.g., photovoltaic arrays or fuel cell curves. As an example, Figure 4 shows the typical fuel cell characteristics with a voltage/current dependence. Embedded calculation on board the G5.UNV assures real-time simulation. 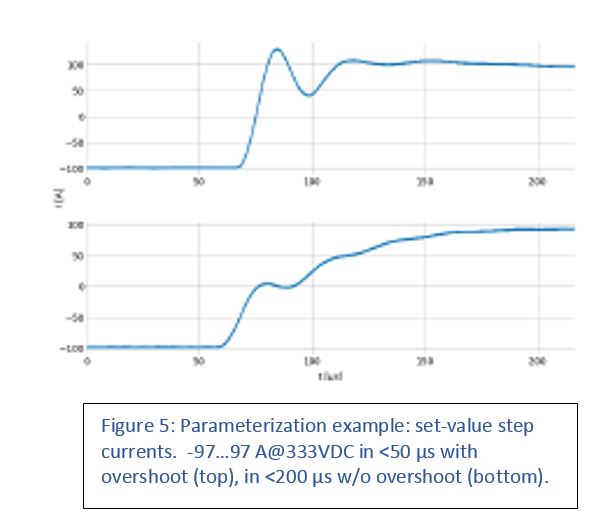 A typical P-HIL setup includes a fast real-time computer driving a power amplifier. The G5.UNV series is best suited for this purpose due to its high dynamics and a fast analog port. Time analog-in to DSP: <50 μs

Maximum speed or minimum overshoot? Figure 5 shows that the dynamic parameters of the G5.UNV series can be easily adapted to a specific task. 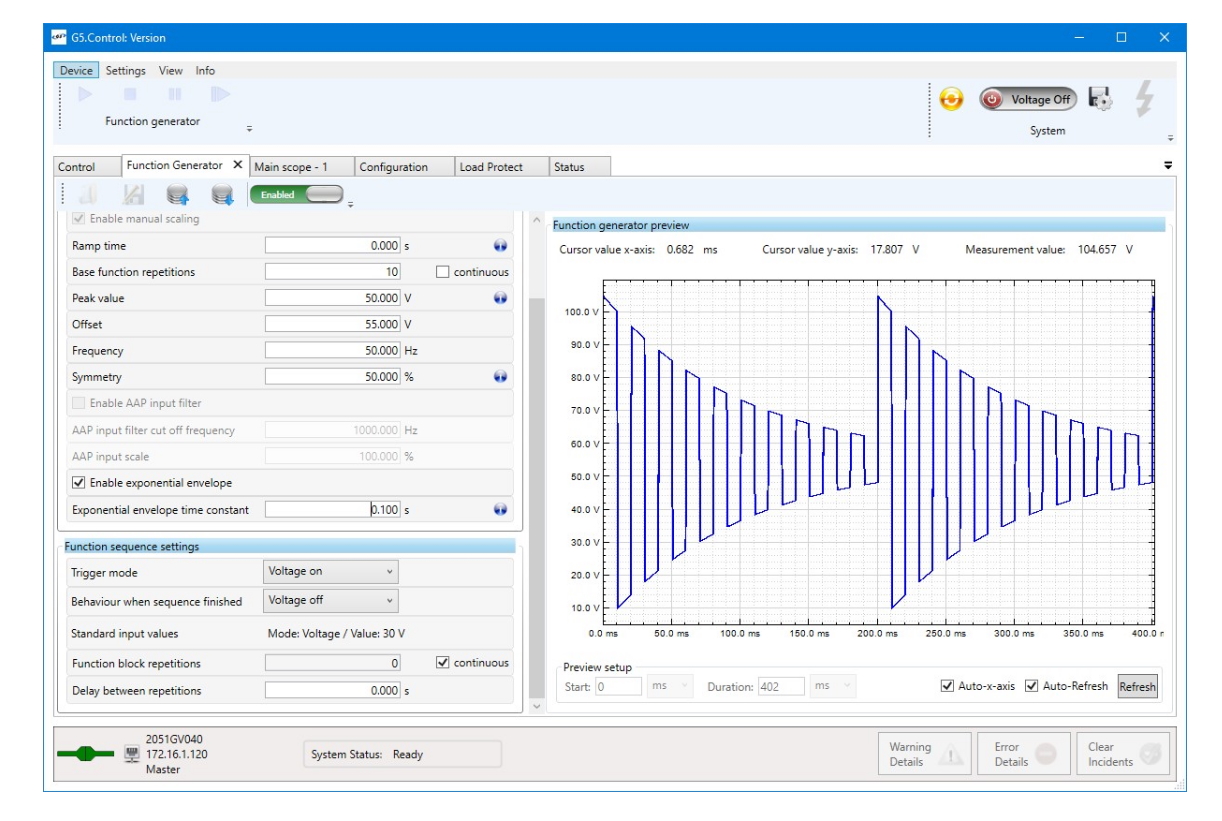 G5.Control allows complete and easy control of the power supply unit or entire master-slave system and also offers a whole range of service functions. A powerful tool for the engineer!

G5.Control is a PC software that simplifies and speeds up the user's work. It has been completely reworked and is now even more ergonomic and provides an extended range of helpful functions.

In addition to basic control, configuration and update functions, G5.Control has a powerful integrated 8-channel digital scope. The high-resolution real-time display of numerous internal system signals allows the engineer to optimize the overall system in a targeted manner. Different configuration settings for single devices or master-slave systems are stored on the devices and can be recalled and edited with G5.Control. Firmware updates can be carried out quickly and easily for individual units as well as for master-slave systems with a single command. When handling support cases concerning the application of the power supplies, the built-in diagnostic functions help to quickly identify the problem.

The G5.Control operating, and service software is included as standard with all G5 programmable DC power supplies and runs on PCs with Microsoft Windows Operating Systems. Tabs and function icons can be arranged individually on the screen by the user.

Programmable, Fast Protection of the Device Under Test

In addition to the operating and service software G5.Control, REGATRON offers various application software packages. For the field of DC applications, these are: